103 Taser-Related Deaths in the United States 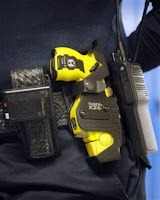 The publisher of the blog Electronic Village has been pointing out incidents of police taser torture for quite awhile. Electronic Village says: "The work done over the past few years by Patti Gillman and Cameron Ward continue to be the inspiration for our work." Gillman and Ward documented over 500 taser-related deaths in North America on their blog. The publisher of Tasered While Black agrees. Patti Gillman and Cameron Ward are truly an inspiration.


According to Amnesty International, between 2001 and 2008, 351 people in the United States died after being shocked by police Tasers.  Electronic Village has documented 103 taser-related deaths in the United States in 2009-2010
Read more HERE
Posted by AAPP at 9:20 AM 1 comment:

As reported Villager at the blog Electronic Village, It has happened again. Freddie Lockett, 30, electrocuted to death by taser fire from an unidentifed Dallas police officers. The man was trying to flee police officers who were answering a robbery call earlier today. According to a police incident report, a man told officers he was sitting inside his vehicle at a gas station in the 2900 block of South Westmoreland around 4 a.m. Saturday morning when Lockett approached the car and asked for money. The man in his car said he didn’t have any money and began to roll up the driver’s side window. That’s when the driver said Lockett opened the door and started punching him in the face. Afraid, the victim told officers he crawled across his car and got out using the passenger side door. He ran inside the gas station and asked for someone to call police. While he was in the store, he said the suspect went into his car and took his cell phone. Police said when they got to the area, they saw a man matching the description of the suspect. When they tried to talk to him, he ran away; but officers were able to catch up to him.  More HERE
Posted by AAPP at 9:11 AM No comments: